Monday's challenge in the Garden

Friday in the garden we had a grilled shrimp recipe. Lindsay brought up the subject of lobster which reminded me of something. (Oh and thanks for the recipe link from All recipes.com, Lindsay--Let me know if you try it!) 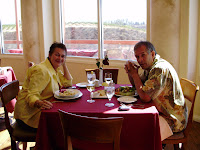 In October 2008, Ron and I visited Temecula, California and did a little wine tasting. We decided to stop for lunch. If you've followed my blog long, I'm sorry if I've already told this story. However today I have a new twist!

We stopped for lunch at The Falkner Winery (it was our anniversary) and I wanted lobster. They had:
Lobster Mac & Cheese
Penne rigate pasta prepared in a four cheese sauce with lobster and prosciutto

I asked the waitress if they had lobster with anything else. There was a Seafood Portofino. I was being picky and didn't want the rest of the seafood, I just wanted lobster. I told her 'Sorry mac & cheese with lobster just doesn't sound good at all.' She told me not to think of Kraft macaroni and cheese, that this was a white asiago cheese with a penne pasta, she said "You will not be sorry."

Against my better judgment I went with the lobster mac & cheese. I was so not disappointed. OMG it was great.

After the comments on Friday I have a hunger for Lobster Mac & Cheese and I'm on a quest to either experiment on my own or find a recipe.

Here's what I'm going to do...
I would love to interview someone from Falkner, so wish me luck. And they had great wines!

Lindsay said…
I tried the recipe I found at Allrecipes. It was okay. But the lobster Mac and Cheese does sound interesting.
9:10 AM

Mary said…
I received a response from the winery owner referring me to someone in the Restaurant. However, he did not email me back. But I have not given up... Yet!
10:13 AM