May News and Notes

Welcome to Mary's Garden where imagination blooms! Our quote of the day:

Virtually nothing is impossible in this world if you just put your mind to it and maintain a positive attitude.
~~Lou Holtz
I've been missing in action this past month. I had a knee replacement. Apparently, I still have month's before I'm back to normal, per my physical therapist. I'm not really sure I signed up for that, but I can't have a do over! So I'm stuck battling the three times a day Torturesizes... Enough about ME!
Remember to check out Two Authors, books and a beverage. Our May chat was about Judy Baker's Western Romance series. You don't want to miss out on that. And there are goodies! 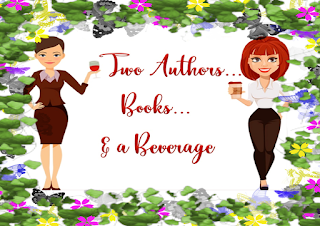 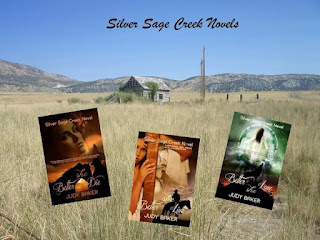 Silver Sage Creek Novel, Book One
Better She Die
In 1858, Clare Rose Coulson of Silver Sage Creek, Texas, is traumatized as a band of Apache Indians murder her husband, her father, and best friend. When kidnapped, she tries to escape only to be captured by another band, but quickly learns this band is Comanche and different. They aren't warriors or savages, but a peaceful, loving people. While living with the band, she learns to respect the Indian ways and settles into a life she never dreamed.
Four years later, Captain Drury Burchett, a Texas Ranger, rescues Clare Rose. Only, the beautiful redheaded woman is angered by her rescue. He's bewildered by the compassion she shows for the Comanches, especially since his hatred for the savages digs deep into his soul for all they've taken from him. What makes this woman so strong in her beliefs and needs to defend the Indians?
“Well written and beautifully crafted story. I look forward to book two.”
Silver Sage Creek Novel, Book Two
​Better She Live
Ruby Thornton, the proprietor of the Silver Sage Saloon is a business woman, not a prostitute. But, because she runs a saloon, the proper folks of Silver Sage Creek treat her as such, until the wealthy Richard Webster moves into town. His reputation of being a gentleman and a lucrative railroad businessman has the entire town smitten, including Ruby.
When a cowboy named Jesse Stryker comes along working for the wealthy Webster, Ruby is torn by her conflicting emotions. His angry eyes contradict his proposition for a night of pleasure. She’s tempted. Only, she isn’t a prostitute.
Ruby’s first instincts about a person is usually right, until now. Who’s the shrewd and fiendish man, the wealthy Webster or Stryker? Caught up in a charmed life, Ruby’s backed into a corner of kidnapping and murder, putting her life and others in danger. Who can she trust?
Silver Sage Creek Novel, Book Three
Better She Love
​
Dr. Millicent’s family never spoke the word love. When she travels to a quaint western town in Texas, and within a few days, she hears the word often from a father she never knew, and a mother she thought dead. After a short time on the ranch, she has doubts about returning to her life in Atlanta? How can she give in to her grandmother’s demands, go back, and marry someone she doesn’t love?
When Sam Coulson meets the high society, prim and proper doctor, he doesn’t think she can fit into the rude, crude and untamed life of the west. But, a vision of her saving him, and her stubborn independence, draws him in until she owns his heart.
Can a kiss, a flashflood rescue, a shooting, and a mad rabid wolf, chase her into the arms of a Comanche half-breed, and convince her she belongs with him?
Check out Judy's books here...
For more information about Two Authors, books and a Beverage Check here...
Don't forget to enter the Rafflecopter!
a Rafflecopter giveaway

And then my good news is, I received an excellent review on Four Sisters!
Blurb:
The early sixties was a time of making love, not war. Kathleen finds love and starts a war with her family.
Four Sisters is a story rich in the relationships of Kathleen Williams' life. Kathleen discovers her sexuality in the sixties. She's different from other girls her age and afraid her sisters, especially her closest sister, Deborah, will never understand.
When Kathleen reveals her love for a woman, her worst fears are realized—she’s banished from her home and family.
Forty odd years later, Kathleen is diagnosed with a terminal illness. Susan, her lifelong partner, encourages her to make peace with her family. Kathleen's journey, now, includes rebuilding her relationship with her sisters and parents, as well as the battle of her life. Her only chance for peace is to find acceptance.
Check here for an Excerpt. 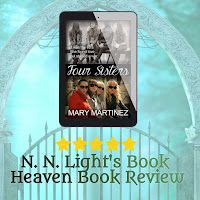 N. N. Lights Book Heaven
​5 StarsFour Sisters is a heart-wrenching story of discovering who you are, family drama, falling in love, life
choices, battling cancer, forgiveness and the bond of sisters. Full review...
As always, stay safe and thank you for your support!

stanalei said…
Congrats on the great review, Mary! Good luck to all in the giveaway!
11:10 AM