Welcome to Mary's Garden. Hope you're all doing well. Welcome back, PJ!
Garden Tip: Grow your own sprouts! 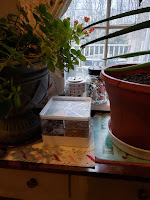 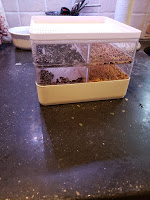 The winter months can leave us feeling low on energy and dissatisfied with tasteless greens found in supermarkets this time of year. So why not sprout your own seeds to provide a fresh, tasty, nutrient-dense kick to salads, sandwiches, and smoothies? You can make do with a simple mason jar, tray, plate, or sack, but sprouting kits are available on line or at your local health food store. They usually come with easy-to-follow directions, a nice assortment of organic sprouting seeds, and a handy stackable tray in which to cultivate a variety of sprouts. It does take a bit of TLC, disinfecting and soaking seeds overnight, and consistent attention to twice daily rinsing, but it’s a fun project to share with your children or grandchildren to introduce them to your love of gardening and the idea of growing their own food. And if you’re like me, this is the time of year you start itching for a chance to see something green sprouting before your eyes!
Enjoy!
PJ 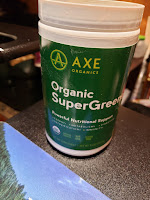 Book titles…what’s in a name?
As authors, naming our book babies can be as complicated as naming our real children. And choosing cover art can take countless hours of searching stock photo sites for just the right image to capture the “feel” of our precious stories. After all, the title and cover are the first things to grab a reader’s attention, and a “bad” title or a dull cover can derail a book before the back-cover blurb is even read.

When I joined the self-publishing boon back in 2011, a lot of us were creating our own covers to save money—a necessity for some of us since we were just getting started and hiring free-lance editors and paying for advertising took up a big part of our budgets. In fact, my first three covers were designed by my husband and me. Thankfully, the titles came easily and naturally, and seemed to have commercial appeal to readers. But eventually, I realized my covers couldn’t compete with mainstream books and I began hiring out the task to professionals. It took me a couple of tries, but I finally found the cover designer for me. Kim Killion of The Killion Group has been a dream to work with. She has reasonable prices, top-notch work, and a quick turnaround time.  I’ve had her redesign my covers to great effect, making them stand out in a very crowded market.

The only exception was my second published novel, ON THIN ICE. I have remained attached to the original cover for reasons I won’t go into here, but I think it’s finally time to let go of the old and embrace a new look for this heartrending young adult novel about a teenage figure skater whose mother is dying of cancer and whose lies set her on a path that will change her future forever. I recently re-read this story and it reminded me of the complexity and underlying beauty of Penny’s journey…certainly worthy of a face lift and an introduction to new readers. I’ll be working on an updated cover for the next few weeks with Kim and we’ll see what she comes up with. Hopefully, I’ll be able to share the before and after with you next month!

As for my current work in progress—the fifth novella in my SAVAGE CINDERELLA series—I’m floating a few different options for titles and would love your input. In keeping with branding of the series (other titles include, FINDING HOPE, LOST BOYS, SACRED GROUND, and BROKEN ANGEL), it needs to be a title with two words and reflect the ideals of liberty, freedom, and justice, themes that are the underpinning of this moment in Brinn’s journey.

Here’s a quick synopsis:
Brinn Hathaway—kidnap survivor turned rookie cop—travels to New York City where her co-worker and current roomie, Detective Daniella Hernandez, is attending to a family crisis. When Dani’s old flame—a superior officer—threatens to destroy her career and her family’s legacy, Brinn vows to do whatever necessary to protect her friend.

Investigating a sergeant in the NYPD for his personal and criminal misconduct might be overstepping jurisdictional boundaries and not exactly a good career move. But bringing to justice the man who had once tormented her friend and righting an old wrong is worth the risk for Brinn. When it becomes clear Dani’s old sergeant won’t be an easy target, and that he’s willing to go to any lengths to escape his dark deeds, Brinn discovers that taking down one of New York’s finest could cost both women more than just their jobs.

The statue of liberty and the topic of immigration are key to the story. Let me know in the comments below which title grabs you most. Suggestions welcome!


Thanks for your help!
See you on the third Monday of March and enjoy the coming full moon😊