The Next Big Thing

I have been invited to participate in this blog hop for the "Next Big Thing". This is a great way to find new authors and books out there. My thanks to Marie Higgins for inviting me to join. 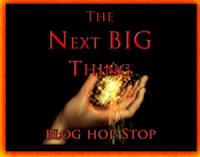 1: What is the working title of your book?
History Mysteries.

2: Where did the idea come from for the book?
My grandson's and I are writing this together. And we sort of came up with it together. We did a walk about our little town of Magna and took some pictures then we made a poster map of our fictional town of Cliffdale. And it went from there...

3: What genre does your book come under?
Middle grade.

4: Which actors would you choose to play your characters in a movie rendition?
I'm honestly not sure, all the child actors that come to mind are all adults and have kids of their own now. LOL.

5: What is the one-sentence synopsis of your book?
Zeke, Nick, and Bart will never forget their summer vacation spent with their nana and old Albert Smith's ghost.

6: Is your book self-published, published by an independent publisher, or represented by an agency?
I haven't decided what route this book will take. The boys and I will have to decide.

7: How long did it take you to write the first draft of your manuscript?
It's already taken a couple of years, anyway the plotting did. It's hard to keep my grandsons attention. But actually writing it will probably be 8 months total.

8: What other books would you compare this story to within your genre?
It's a cross between Hardy Boys and Harry Potter

9: Who or what inspired you to write this book?
Marcus, Zack, and Tony by three grandsons.

10: What else about your book might pique the reader’s interest?
It has a bit of mystery with the added spice of fantasy.

Unedited excerpt:
Sadie made her way through the house, remembering how different it looked when Trudy lived there. Had her friend seen something in the future that prompted their move?

Taking a deep breath she let the memories go, they wouldn’t help her find what her young men had been up to at the house that morning. Climbing the stairs, carefully placing each foot softly trying not to make any noise, she sensed she wasn’t alone in the house. Pausing she opened her mind to see if she could catch some fleeting thoughts from the person.

She caught her breath. Zing, whoever it was sent her query back with force. Sidling to the edge to the balustrade she peeked over, a shadow fleetingly moved across the opening of the living room.

Should she call out?

No, she needed to find out what she’d come for, then get the Hades out of there. As quickly as she dared, she raced to the bedrooms. Now which one? She pushed open the first door, and there was the lamp she’d seen in one of the boys thoughts. She went to the dresser and on it was an old newspaper.

Albert Smith had robbed a bank? She hadn’t known. That explained why had he kept to himself, but not where he had gone. Go now.

Who had said that? Sadie whirled around, in the corner a wavery image of Smith stood, no, floated. He was pointing to the door. Hurry, go.

She didn’t wait for further instructions. She felt whoever was in the house was close. She peeked out the door. Coast was clear. She didn’t give another thought, raced down the stairs, through the kitchen. Before she reached the mudroom she thought she’d heard a very human voice call out. She didn’t stop to find out. Once in the tunnel the door firmly closed behind her, she stopped to catch her breath.

She was too old for this crap!

I now would like to tag these authors to post a blog about their new books:
Stanalei Fletcher
Tiffinie Helmer
L. L. Muir
Doree DePew

In honor of the release of Three Brides and a Dress, I had a drawing and anyone who commented about the book or any other of my books, followed me on Twitter, friended me on Facebook, etc. had their name entered into a hat for a drawing. And the winner of a signed print of one of my books is Beverly Wells. Congratulations!
Labels: The Next Big Thing

stanalei said…
The mystery story sounds like a lot of fun and even scary. I'm sure you're having a blast writing with your grandsons. Thanks for the tag, too!
9:41 AM

Seyyah Aile said…
I LOVE your blog so much! The layout is amazing.
I'm your newest follower via google (157).
I'd love it if you could check out my blog and follow me back as well Also,
if you'd like to keep in touch via twitter,
just do so and let me know so I cab follow back =)
Have anice day, hugs Beyaz Sır <3
http://whiteglaze.blogspot.com
twitter: @_gamzeahmet_
3:29 PM

Neha Bhambu said…
Good and interestng scene for the story !
10:12 AM

Mary said…
I've been working this morning on this and another 13 pages down, about another 100 or so to go. Whew, can't wait to finish.