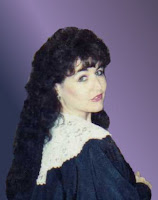 It’s been a very busy December for me. I have had so many interesting and fun guests in the garden. And guess what? I have another guest. Regan Taylor, has visited before. And we always love having her, today we’re going to talk traditions and you may be surprised by what comes up. Pile your plate full and then find a seat. Don’t forget the holiday blog contest, if you haven’t heard about it you can check my web site.

Mary: Regan, can you tell us a little about your growing up years? Have you always lived in northern California?

Regan: No, actually I grew up on Long Island. I moved to California for college.

Mary: Do you celebrate the traditional Christmas holiday? If not, what do you celebrate, the winter solstice? Can you tell us your ritual?

Regan: I celebrate the winter solstice, Yule. It’s a pretty simple celebration where we have a yule log with three candles. For some pagans they represent Mother, Maiden and Crone. For me they represent Isis, Osiris and Horus. I also have two other candles, one for Bastet and another for Sekhmet. We light the candles, offer blessings, do some readings and end with cakes and ale. This year it is on December 22.

Mary: Can you explain to us a bit about the Solstice, I know it’s an astronomical event that happens twice a year, please correct me if I’m wrong.

Regan: Yes, it is an astronomical event but for us it is something more. For us it celebrates the rebirth of the Great horned hunter god, Cernunnos who is viewed as the newborn solstice sun. For Isians it is the time we talk about the story of Isis and Osiris which dates back over 10,000 years. Some Isians believe it dates back over 20,000 years and elements of their story may seem familiar to others.

Before Ra, who created earth, left the earth he knew that if the goddess Nut bore children, one of them would end his reign among men. So Ra laid a curse upon Nut - that she should not be able to bear any child upon any day in the year.

Full of sorrow, Nut went for help to Thoth, the thrice-great god of wisdom and magic and learning, Ra's son, who loved her. Thoth knew that the curse of Ra, once spoken, could never be recalled, but in his wisdom he found a way of escape. Thoth helped Nut to give birth to four children: Osiris, Horus, Set, Isis and Nephthys.
When Osiris was born many signs and wonders were seen and heard throughout the world. Most notable was the voice which came from the holiest shrine in the temple at Thebes on the Nile where it was proclaimed to all men that Osiris, the good and mighty king, was born to bring joy and peace to all the earth. When Osiris was grown up he married his sister Isis, a custom which the Pharaohs of Egypt followed ever after. And Set married Nephthys.

Osiris, went on to teach the people of Egypt how to live peacefully and happily together.
But evil Set envied Osiris and hated Isis. The more the people loved and praised Osiris, the more Set hated him; and the more good he did and the happier mankind became, the stronger grew Set's desire to kill his brother and rule in his place. Isis, however, was so full of wisdom and so watchful that Set made no attempt to seize the throne while she was watching over the land of Egypt. And when Osiris returned from his travels Seth was among the first to welcome him back and kneel in reverence before "the good god Pharaoh Osiris".
Bet Set was busy at work and with the help of seventy-two of his wicked friends Set obtained the exact measurements of the body of Osiris, and caused beautiful chest to be made that would fit only him. Then he held a feast to honor Osiris and then enticed his brother into the a coffin like box made exactly to Osiris’ measurements and proceeded to nail it shut and sealed every crack with molten lead, so that Osiris died. Set and his companions took the chest which held Osiris’ body and cast it into the Nile to be carried it out into the sea.

Meanwhile in Egypt Isis was in great fear. She had always known that Set was filled with evil and jealousy, but kindly Osiris would not believe in his brother's wickedness. But Isis knew as soon as her husband was dead, though no one told her, and fled into the marshes carrying their child Horus with her. She then went to seek Osiris’ body and finally found him, but he had been separated into thirteen parts. Out of her great love for her husband Isis reformed his body enabling him to rise from the dead. Through Isis’ magic Osiris was reborn.

Their full story can be found at: http://www.egyptianmyths.net/mythisis.htm

At this time of year, on Yule, we celebrate the rebirth of Osiris and the hope that comes with that transformation. We also honor Isis because it is through her great love we can be reborn. Being reborn doesn’t necessarily mean you have to die and return from the dead. It can be a fresh start, a new idea, a new direction or just a change in perception that makes our lives better.

Mary: Thanks Regan, that was a great history on the solstice. I love learning new things. Now I’m going to switch gears to writing. Can you share a blurb with us from your book, Her Eyes?

What would you do to be with the one you love? Would you be willing to die and then find a way, any way possible, back to them?

When Frank White married Catherine he took to heart the words “for better or worse.” With Catherine he got the worst of the worse….or did he?

And if I might, please check out the Links page on my website where I have some information on organ donation and the amazing gift anyone can leave behind. http://regantaylor.com/Links.htm

Mary: And where can all your new fans find you? Web site, Twitter, Facebook, Blog and anywhere else you can think of.

Thanks for joining us today, Regan. I’ve had a blast as always.

Thanks for having me Mary!  Love visiting the garden!

Mary Preston said…
I enjoyed learning more about the Solstice thank you.