Irish in the Garden 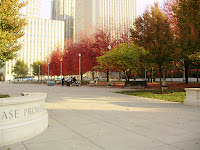 No I'm not having little leprechauns or anything. I'm going to regale you with our adventures to Chicago and South Bend for the Notre Dame vs. Utah game. Yes my team got their bottoms handed to them on a platter.

However, we had the best time ever. If you have the chance to visit Chicago, do so. It's one of the cleanest cities we've been too. And the sights are awesome. But that wasn't the best part of our trip, it was South Bend and the campus of Notre Dame.

I've never experienced such beautiful, courteous, nice, friendly--and the list goes on and on--people. We were greeted, and thanked for visiting, over and over. Friday we went on a tour of the campus, during which I had to refrain from chanting, Rudy, Rudy! but I did, barely. I need to watch the movie again, just so I can point and say, I was there. 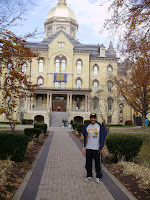 The place is full of traditions, we tried to experience them all from the trumpets in the dome the day before the game, to the band on the steps prior to the game. The Grotto and touch down Jesus. They have or had a new tradition where the students or swim team not sure who, would jump in the reflection pool in front of touch down Jesus while the band marched by.

We watched as they lined up in their speedos, goggles and their blow up floaties ready to jump in. And one security officer came by and told them it wasn't going to happen any more. And they didn't even try to disobey.

The band was a small city, in number that is, and they were so good they sent goosebumps down your spine.

Well I'll stop boring you and post some pictures instead. I highly recommend a trip there even if you don't see a ball game!

Here's the band on the stairs pre-game
And here they are on the field.