Welcome to Mary's Garden where imagination blooms. Today I'm letting my other persona, M. L. Foxx, take over the blog.

First let's have a bit of motivation with the quote of the day.

Without this playing with fantasy no creative work has ever yet come to birth. The debt we owe to the play of the imagination is incalculable.
~~Carl Jung

Hi,
I'm M.L. Foxx. I'm so excited about this book. Here is a bit of background.

Why a Celtic trilogy? 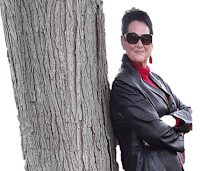 Years ago I came up with the idea of writing Celtic Myst. At the time it was only one book. However, I could never feel the scene. The characters were alive and well in my mind, but I had never been to Ireland. Usually that does not matter.

When I visited Ireland in 2015 the minute I stepped onto Irish soil I felt I had come home. Suddenly I had my story. Or as it turned out a trilogy. This story is closer to my heart than any others. It is such a different genre than I usually write I choose to publish it under another name with another persona of myself.

The most Irish part.

I plan to have the trilogy in a box set in October.
I hope you enjoy.
And here is a little about each of them.

A magical chalice, a legacy with the dragons,
​and a destiny forged through the centuries. ​​

Book 1 The Cupán of Flúirse
​Celtic Myst Trilogy is a story of good against evil. A story of great love that spans centuries. And above all, a story of courage. 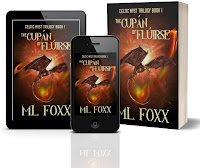 ​Forged by the gods, the Cupán of Flúirse is born under the thunder of Taranis, fashioned with symbols of the elements to bring peace and abundance to the clans.

Element of the air, Amergin is a faithful protector and guardian. Through the years, he’s guided the other elements and reigned over times of peace, prosperity, and royal births.

However, the witch Mourdra, is plagued with jealousy over the clans. They hold dear all she desires…and has been denied. The fire dragon and Klenidalf, an evil wizard are tasked to do her bidding, to plunder the clans…and steal the Cupán of Flúirse.

Without the sacred chalice, Amergin is condemned to wander the Earth, those he’s vowed to protect out of his reach.

Book 2 In Search of the Cupán of Flúirse
A journey through the ages, a battle with evil, and a sacrifice for all that was lost. 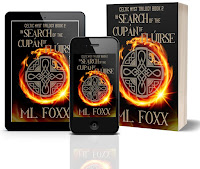 Aibell Brid, heir of the de Danann clan will need more than courage to find the lost relic of her clan. When the time comes, will she be ready to face her greatest enemy? With protector and guardian Amergin, she plans for battle, honing her skills, preparing for the day she can reclaim the Cupán of Flúirse.

​Knowledge is power and strength is in numbers. Amergin must trust in the words of Gaylord the Great. He will know when the time is near. With Aibell and a force of brave, trusted souls, they will face the witch, destroy her dark forces and reclaim the Cupán of Flúirse.

Book 3: Returning the Cupán of Flúirse
​A prophecy, a final epic battle and a mystery revealed. 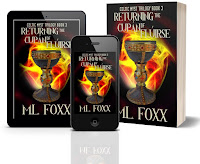 To fulfill the prophecy, the Cupán of Flúirse needs to be returned to its right place, the Tomb of the Tuatha de Danann. However, through the centuries the location has been lost.
Amergin is again entrusted with the responsibility to guide the de Danann’s to fulfill their destiny. On their mission, Gaylord the Great vows they will encounter three foes in order to reach their destination. To find the lost tomb, they must travel in darkness in increments of three. They must survive battle with their nemesis and make their way across Inis Fail on foot and horseback in six dark moons.

In this epic conclusion, Amergin discovers sometimes the most important quests sought in the future, must be accomplished in the past.

I hope you enjoy reading it as much as I enjoyed writing the trilogy. ML. 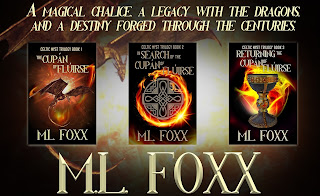