Welcome to Mary's Garden, our guest today is Dee S. Knight. First we have a winter garden tip!

How to protect flowering plants

While plants generally will survive hard winter freezes, blossoms on winter-flowering plants such as camellias and plum and cherry trees aren’t so lucky.

When buds are swollen and blooming is imminent, a hard freeze can damage the buds. The damage can remain hidden until the flowers open and then show up in the form of brown spots on the petals. In some cases, the entire bud may freeze and drop off the plant. Fully open flowers will either turn a sickly brown or fall to the ground.

To avoid the disappointment of unsightly flowers or losing them altogether, cover plants that have buds and open flowers with an old sheet or a commercially available frost cover. (Don’t use plastic: It can quickly create an oven effect when the sun shines on it.)

You can also trick Mother Nature by cutting the buds in advance of the freeze and bringing them indoors to let them open in the house. If a freeze is predicted before buds have been set, there is no need to add a protective covering.

Here’s a list of dos and don'ts to help your plants survive hard freezes and to help you enjoy the blooms on the many beautiful winter-flowering plants.

One Woman Only
The Good Man Series, Book 2
By Dee S. Knight
♥♥ GiveAway ♥♥
Dee is giving away an ebook of Only a Good Man Will Do and a $10 Amazon card to giveaway during the tour. Please use the Rafflecopter below to enter. Remember you may enter every day for your chance to win. You may find the tour locations here http://bit.ly/OWO122019

About One Woman Only:

As one of a set of triplets, Jonah always feels the need to make his individuality known. So where his brother Daniel is serious and completely focused, Jonah shuns commitment. Where his genius brother Mark is hailed in the scientific world, Jonah hides beneath a car, tinkering. Thing is, being different isn't all it’s cracked up to be. It takes a woman—the right woman—to make him see that a "good man" can always be a better man.

One Woman Only Buy links: 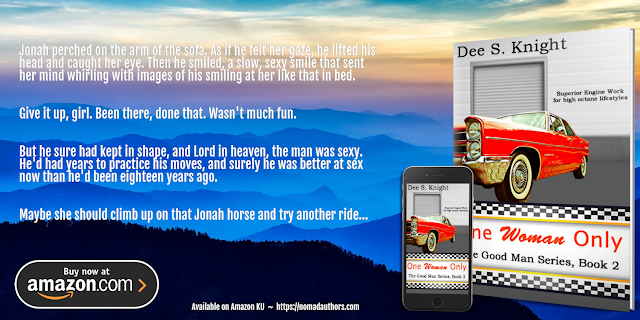 Excerpt from One Woman Only:

"May I have this dance?"

Kelly turned at the sound of Jonah's voice behind her. Dinner had ended. All three of the boys had given best man speeches and Eve had even given a very creditable matron of honor speech, considering she had only known Marilyn and Caleb a short time. Lots of toasts had been raised and finally the live band had struck up the music. Caleb led his bride onto the floor for a foxtrot—a dance more than half of the guests had no idea how to do, including her.

Facing Jonah she sighed inwardly at how scrumptious he looked. Sure, his face was pretty much displayed on his brothers' heads, too, but there was something different about Jonah. His nose was just a little crooked from when Bobby Hendricks had broken it in ninth grade and his eyes held an especially bright sparkle when he smiled. Maybe… Well, she didn't know what caused the difference between Jonah and his brothers. Whatever it was, she had never been fooled by the so-called identical nature of the identical triplets. She'd wanted to be his girl since elementary school. Thought she would be in high school. And then she’d forced every last thought of him from her mind from senior year on.

"I don't know how to foxtrot."

He shrugged. "Who does except those over fifty?" He glanced at his folks, still alone on the dancefloor, although a few couples were wandering out to join them now. "We can pretend."

She mentally compared standing on the sidelines alone now that Mama Rio left the party, or being held in Jonah's arms. Smiling, Kelly held out her hands. "Just don't step on my toes, Jonah Goodman, or there'll be hell to pay."

"Yes, ma'am." Together they walked onto the dancefloor. He took her right hand in his left and placed his right hand on her waist. Fortunately for them, the music changed to a slow tempo. Kelly laid her head on Jonah's shoulder, and he tugged her closer as they swayed to the music.

"This is nice," he murmured.

"Yes it is," she replied. So very nice. He smelled good. Beneath the light citrus fragrance of his aftershave was a slight whiff of pure man with maybe a twinge of motor oil or something so Jonah it brought tears to her eyes. He rubbed a path up to her shoulder blades and gave a squeeze. "You fit me perfectly, Kelly."

"You sure do. I think our hearts can feel each other beat."

Kelly chuckled. "Smooth talker. Face to face like this our hearts are on opposite sides."

She sighed. "Keep on. It's appreciated."

She felt his smile. Raising her head she gave him a mock glare. "Watch it with those pregnant pauses, buster."

He used his hand to press her head back to his shoulder. "You do smell good, though. This isn't the same perfume you wore in high school. That was—"

"Lilac," they said at the same time. Once more she raised her head to look at him.

"How did you remember that?"

"I remember much more than you might think." He turned her and moved her closer to the door onto the patio.

"Each spring when lilacs are in bloom memories come flooding back. Does that surprise you?"

"More like shocks me," she said, grinning. And then she laid her head on his shoulder once more, finding she liked it more and more there in his arms. She stepped slightly closer and his arm tightened about her. "Well, after a while I thought lilac seemed too girlish. I like the vintage scents, so in college I wore Wind Song. Then Shalimar was the scent Brad liked me to wear." She felt Jonah stiffen when she mentioned her ex, and really she didn't blame him.

"But when I grew up enough finally to take charge of my own life, I started wearing Chanel No 5. A complex fragrance for what I hope is a complex woman."

"It suits you. Complex and beautiful." He kissed her temple. "Want to step outside for a minute?"

On the patio, they could hear the sounds of the people from the television networks packing up equipment, chatting and laughing. Stars shone brightly in the clear night sky. Wood smoke from someone's fireplace wafted through the air and static electricity fairly crackled in the crispness of the autumn air.

"This is my favorite time of year," Kelly said. "The heat of summer is gone and winter nights curled up with a hot drink and blazing fire are ahead."

"A hothead you mean?" she teased. "Oh, I'm hot all right." He waggled his brows at her. Kelly laughed.

"I do seem to remember that about you."

"You used to be pretty hot yourself. Still are." He leaned in. His eyes flicked down to her lips. Kelly sucked in a breath. She should stop him, she really should. 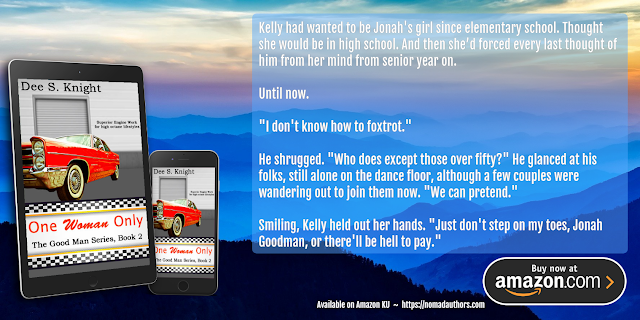 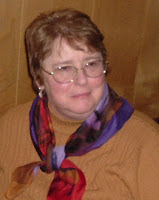 A few years ago, Dee S. Knight began writing, making getting up in the morning fun. During the day, her characters killed people, fell in love, became drunk with power, or sober with responsibility. And they had sex, lots of sex. Writing was so much fun Dee decided to keep at it. That's how she spends her days. Her nights? Well, she's lucky that her dream man, childhood sweetheart, and long-time hubby are all the same guy, and nights are their secret. For romance ranging from sweet to historical, contemporary to paranormal and more join Dee on Nomad Authors. Contact Dee at dsknight@deesknight.com.