Welcome everyone to the garden! I believe spring is finally here. Well it’s official on the 21st of March, correct? Check out the goody table and fill your plate, find your favorite beverage and let’s get started. Today our guest is Linda Burson, she’ll be continuing our series on Authors on writing a series. 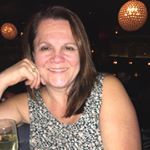 Linda is an author from Connecticut.
After years of writing and editing for others, raising a family, and over twenty years of running her own businesses, Linda decided to tackle her first fiction novel entitled Rage, which began as a single book. Eventually, the novel became a trilogy, and finally a much longer series. All the books are a part of The Marcy Series, a romantic suspense series. Find out more about Linda at:
Facebook Instagram Website Goodreads Amazon Author Page
Twitter: @lindaburson23

I’m one of those people who love to talk. I can chat about many topics, and depending if I’m feeling energetic, go on and on. I figured if I started writing, I probably wouldn’t get everything I wanted to say down in only a single book. So, I had decided I would write a trilogy. I had read many trilogies and a few were exciting and fun. I always enjoyed getting to know the characters even more through multiple books, not just one. This was the reason I decided to attempt a three book series.

The series I wrote is entitled the MARCY SERIES. Originally, as I stated above, it was supposed to be a trilogy, but I made one huge mistake…I didn’t realize there was a limit on how many words you could use in a single book. I had much to write, and the words weren’t stopping, so I kept going. By the time I was finish with what I felt were my never-ending thoughts, the number of words in my first book was upward of over 175,000. This is when I found out that that was way too many. I was told by a literary agent acquaintance of my daughters that that many words in a single book would give every agent pause. Little did I know, she was being polite.

Novels, especially novels from first-time authors, shouldn’t be written with this many words. The industry doesn’t recommend having the word count more than 100,000 in a single book, and that is maximum. Hence, my three-book idea became five books. What I also neglected to explain to this literary agent was I still wasn’t finished with the story. That was only the beginning and part of the middle. I still had the rest of the middle and the end to go. I figured I could probably wrap it up in another two to three books. It didn’t work out this way.

I’m a pantser, as it’s called. Pantser writing is just like it sounds; we write by the seat of our pants. I mean, I had a basic idea of what I wanted to write. The story was in my head. I just didn’t have the details completely worked out. They came to me as I continued to build my characters and their story. The more I got to know my exciting characters, the more I had to say.

By the time I reached the eighth book, it wasn’t nearly complete. I was writing between twelve to eighteen hours a day, occasionally only stopping to have meals, let the dog out, and attend to other personal needs. I kept a bottle of water by my side and just kept writing. The first time I realized I may have been getting somewhat obsessed was when, after I said goodnight to my husband around 11:00 one evening, I lifted my head from my computer just a short time later, or so I thought. I noticed it was no longer dark outside my kitchen window. I didn’t understand how that was possible. It was only around 1:00 or 2:00 in the morning, wasn’t it? I turned to look at the clock behind me. No, it was not 1:00 or 2:00 a.m. It was 7:00 a.m. I sat at my kitchen counter on the bar stool stunned that I had written all night long without a break.

I stayed up again a few other times the whole night, but mostly because I realized I did my best work, I felt, during those hours. It was quiet; the dog was asleep, my husband was asleep, the phone wasn’t ringing, no one came to my door, and I wasn’t concerned about the bills that were sitting off to my left because, after all, what could I do about them at that hour?

Eventually, I got to the point where I realized it was probably not healthy to stay up all night. Besides that, I needed sleep, and during the day it was difficult to sleep because the phone was ringing, the dog needed attention, my doorbell was buzzing, and those bills were at the forefront of my mind. I switched back to writing mostly during the day and then in the evening when my husband could help with the distractions, even though he could be one of those distractions with the television blaring. He suggested I wear noise-cancelling headphones so the TV didn’t disturb me. They worked somewhat, but I could still hear too much, so I added music and that did it. I was completely ensconced in my writing world. This is also when I noted that the music actually helped me with writing, especially with love scenes or adventures. It gave me that extra edge I needed.

Finally, I knew how I wanted to end my MARCY SERIES. By this time, I was at twelve books—yes I know, wow, twelve books. But I was. The next and final book had to wind it all up in a neat package and answer every remaining question that was raised throughout the entire series. I believe this aspect was completed well, and in a most entertaining way. I am satisfied with my entire MARCY SERIES; however, if I were to give anyone any advice whatsoever? I’d recommend they start off with a smaller project—like writing a stand-alone story first.

Writing this series was challenging, but enjoyable for me. It took me a few years, but all in all, I’m pleased with the outcome. I obviously had to finally start taking more accurate notes and keeping track of in-depth information so the continuity flowed throughout the entire series. After all, by the time I reached Book Thirteen four years from when I started Book One, I needed to make sure all my information at the end was precise. My notes definitely helped and I referred to them often, but I still wrote each chapter and each book pantsing through it.

As of the writing of this blog article, five MARCY SERIES Books are published. I’m looking forward to having Book Six published this year (2017). Book Seven is just about edited; however, the balance, though written, do need extensive editing, but they are complete…the story is there. I’m hoping my publisher will be interested in publishing the entire series; but, I suppose, that depends on how well the first part of the series does with readers. So, if anyone is interested in romantic thrillers/suspense and picks up a copy of my first book in the series, RAGE, I hope you’ll write a review. I also hope you enjoy it enough to continue reading and go on to Book Two, CONFUSION and keep going. 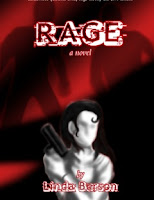 Marcy Jensen finds she is having nightmares that she can’t control. She is frustrated, angry and
confused by this sudden change. Her boyfriend and love of her life, Brad Preston, gives her an ultimatum: seek help, or he’s leaving.

One dark, chilly evening after a terrible, emotional day, Marcy finds herself in the middle of a robbery and a gun to her head. After her stressful day, she snaps. Pushed over the edge, she finds herself attacking the gunman.

The same night after this attempted robbery, Marcy meets Liam with whom she feels an inexplicable connection. After talking to Marcy, because she still having the raw edge of the evening with her, Liam convinces her to join him on his quest to find his family’s murderers.

As they delve into the dark world of revenge, Marcy’s life begins to fall apart. Before she realizes it, she falls in love with this mysterious stranger. They become close and gradually allow light and love to envelop them.

Excerpt:
When we arrive at the commuter lot where my car is parked, I remain seated looking at him. My thoughts return to the moment I realized I was in love with him. Was it always there somewhere in the depths of my soul, or was it at the moment when I saw the real person? My heart skips a beat every time I look in his direction and my emotions take over.

“You must think I cry an awful lot,” I impart as the tears come streaming down my face again.

“No, baby. I know you’re in pain right now. I wish I knew how to make things easier for you—for both of us.” Then he adds,

“Oh that my head were waters
And my eyes a fountain of tears
That I might weep day and night.”

I look at him with my tear-filled eyes. “That’s beautiful.”

“You’re a special man, Evan Liam Brooks. I don’t understand why all this happened, but I have to believe there’s a reason. I have to trust in my faith that everything will be fine and will work out as it’s supposed to.”

Thank you, Linda, for visiting the Garden. I hope you can join us again.
Labels: Book Series

Sandy L. Rowland said…
Wow! So many books from one idea. I wish I had that problem. Linda, you are an inspiration to all pantsers out there and every writer who wants to do a series. It is possible!

Thanks for sharing your fun attitude and the wisdom.
10:07 AM

Toni V.S. said…
I know what you mean, Linda. I started out with a single book idea and it ended being a series of 15 novels.
5:36 PM

Linda Burson said…
Thank you, Sandy. Absolutely, it's possible for you to write a series. It just takes an enormous amount of time. But, I did have a lot of fun doing it.

Mary said…
Thank you for visiting. I to and a Pantser! So I relate!

And thanks Sandy and Toni for dropping by!
Mary
5:42 AM

stanalei said…
Congratulations on such an amazing accomplishment. And wishing you the best of luck with all the books in your series, Linda!
10:54 AM

Linda Burson said…
Thank you Stanalei. I am pleased with the outcome of the series, and so far, for the most part, the feedback has been great--quite positive, which makes me feel super about the accomplishment. Of course, we know we can't please all, but if we make those who read our genre happy, it's worth it.